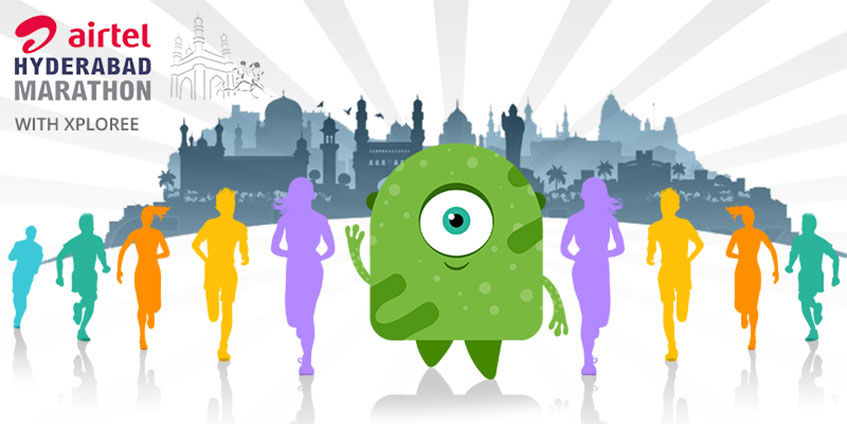 Held on the 28th of August, the Hyderabad marathon witnessed a unique keyboard driven digital campaign in its 2016 chapter. The campaign was launched in association with Xploree being named as the official smart keyboard partner for this event.

Through Xploree, runners were able to get valuable endurance essentials and fitness boosters at their fingertips. Promoters of the prestigious marathon were able to extend its outreach to an audience base of active fitness enthusiasts, social promoters and all Hyderabadis who were eagerly following the much anticipated event. Promotion of Xploree’s live fitness session with Talwalkars became the talk of the town and made crowds flock to the SportEx venue in drones.

The event saw the launch of hashtag #LiveStrongWithXploree which brought marathoners together on the social media and catapulted the run into a tech savvy affair with fitness preparation and more importantly long distance survival as a central theme.

The swell of Hyderabadi pride achieved among campaign followers touched a high point when the campaign drew 10000 likes midway on Facebook to ultimately reach 20000 until a few days to the final day of the run.

Let’s walk down memory lane and glance through Xploree’s footprints on the Hyderabad Marathon 2016. More than winning it was a celebration of togetherness:
KeyPoint employees had a dream run at the Hyderabad Marathon 2016 Let’s have an online race first:

A fun filled Facebook give away contest to distribute free passes for runners who didn’t want to lose out on the opportunity to participate in the Hyderabad Marathon 2016 was conducted by Xploree.

Xploree in association with the Hyderabad marathon 2016 organized drew frenzied interest from potential runners who took part in a GIF-based game in which contestants had to stop the running guy on the finish line & share back the screenshot on Facebook. Don’t fall flat on your toes if the going gets tough at the Hyderabad Marathon 2016:

Xploree promoted marathon booster posts in association with fitness partner, Talwalkars. This initiative saw the launch of a marathon fitness album which brought participants and enthusiasts of the Hyderabad Marathon 2016 to share tips with fellow runners. Xploree ran an in-app marathon campaign which saw many Hyderabad marathon participants download the app prior to the actual date of the ultimate run. Fun-filled time for Hyderabad Marathon 2016 runners at the Xploree stall in the pre-marathon event:

“Take a chance on me”… the dart board game kept at the Xploree booth drew runners thronging for a second, and a third, and another chance at the game. There were no losers here as all runners got another lease of life!

The event also saw the launch of the Xploree run T Shirt, cap and sippers given away as marathon freebies for runners at the pre-marathon event organized by HITEX in association with keyboard partners Xploree. Fun on the stage: One of the participants said after the workout
– “I’m no Victoria’s Secret model. But I’m pretty sure that I can take one on my shoulder and run a mile after this one.”

The live demonstration stage activity in the expo was a big hit among runners. A video of 1 & half minutes was played kept playing at the backdrop to the live fitness session in the event for over 3000 people. 1 hour Zorba & Numa sessions were conducted by our Fitness partner Talwalkars,who gave instantaneous and exclusive fitness tips to visitors. Gallivanting around the town; painting it in the spirit of the marathon

Running is super cool and so were the slogans and images on graffiti wall posters erected at different spots around Hyderabad on the eve of the Hyderabad Marathon 2016.

Before the big day, select runners were invited over to paint graffiti posters that garnered the eyeballs of over 15000 runners and an equal number of spectators. These posters depicted a marathon runner’s journey from the start to the finish line!